22 Mar Alcoholism, Gender and Socioeconomic Status (It isn’t what you think) – by Clark Gaither, MD, FAAFP

Posted at 11:39h in Substance Use Disorders by Beth

A cursory review of the statistics from the National Survey on Drug Use and Health (NSDUH) for the demographic eighteen years of age and older shows the incidence of alcohol use disorder to be 6.2% in the general population, of which 8.4 % are male and 4.2% are female. Factually, these numbers are in concert with the incorrect but general notion and gender bias that a higher percentage of men are alcoholic versus women.  However, these statistical ratios do not hold for all demographics. Not surprisingly, on a percentage basis, the numbers are much higher in the medical professional demographic. What is surprising is that women in medicine far outnumber their male counterparts for alcohol abuse and dependence.

The study by Oreskovich et al¹, appearing in The American Journal on Addictions, painted a much different picture for the medical professional demographic versus the general population. A total of 27,276 physicians were surveyed and 7,288(26.7%) responded. Alcohol abuse or dependence (DSM IV terminology) was present in 12.9% of male respondents and an astounding 21.4% of female respondents. 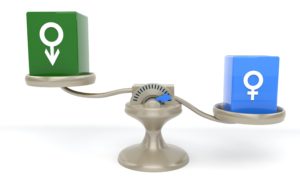 If you are like me, these statistics are not what I expected. I suppose I’m as gender biased as the next person in expecting the rate to be higher for men. I assumed a similar pattern would follow for male versus female medical professionals. For me, it was the degree to which female physicians are affected by alcohol that constituted the biggest surprise in this study.  The reasons the rates of alcohol use disorders are higher among female physicians have been teased out from other studies. Two other studies²,³ have demonstrated female surgeons and physicians tend to suffer more from work-home life conflicts which appear to be associated with high rates of depression, burnout and alcohol abuse.  Job related burnout is strongly associated with a full third of all chemical dependence, behavioral, and mental health issues in medical providers and is moderately associated/linked with another third. The reason job related burnout should be on everyone’s radar is because when healthcare providers burnout, many will act out in an attempt to make themselves feel better. Alcohol happens to be just one, easy, legal, socially acceptable way.

Alcohol dependence usually begins innocently enough. Virtually no one wakes up one day and decides to develop a substance use disorder. Why women would gravitate to alcohol more than men is unclear.  A glass of wine or a beer is consumed to relax, elevate the mood or to help with sleep. Just like many drugs, alcohol quickly loses its effectiveness with time. Tolerance and accommodation develop quickly. Over time, one glass of wine turns into two, two into three, three into a bottle or more per evening. Social drinking becomes binge drinking, binge drinking becomes dependence and dependence becomes a substance use disorder (SUD).  Alcohol, a CNS depressant, ultimately worsens the mood causing increased feelings of depression. More alcohol is consumed in a never ending attempt to relieve those feelings which deepens the depression. A downward mood spiral results. Combine this with unrealistic, uncontrollable and unsustainable mandates and workloads, is there any wonder why, in a moment of desperation, depressed physicians turn to suicide in such high numbers?

A Better Work/Life Balance
Is Essential

We are losing far too many of our female and male providers to burnout, depression, and substance use disorders. It is time to stop paying lip service to adequately addressing job related burnout and mental health issues in the healthcare arena. To reduce or eliminate toxic burnout from the workplace, the focus must shift from changing the provider to changing the work environment, to decrease the causes of burnout while fostering an atmosphere of engagement.  How? Awareness, education, and compassionate action.

If you or a colleague need assistance dealing with burnout or a substance use or mental health issue, please contact NCPHP at 919-870-4480.  We are here to help!