02 Aug Do You Have a Problem with Alcohol? Take This Test and See – by Clark Gaither, MD, MRO, FAAFP

Posted at 16:00h in Substance Use Disorders by Beth

In the United States, alcohol is a pervasive and socially acceptable drug. Unlike other mood-altering drugs, no prescription is needed. Supermarket and other retail outlet shelves are lined with all manners of alcohol containing beverages from beer to wine to liquor. All that is necessary to purchase any of these is proof of legal drinking age and a monetary means of exchange.  In 2016, total alcoholic beverage sales in the US totaled $223.2 billion. Annual sales were level for many years but have been rising year-over-year since 2011. If one is industrious, alcohol doesn’t even need to be purchased. Alcohol-containing beverages can easily be made at home with a modicum of inexpensive, off-the-shelf equipment and supplies.

Introduce a large group of individuals repeatedly to alcohol and over time a certain percentage of them will become problem drinkers or alcoholic. There are no educational, gender, cultural, or socioeconomic barriers as to whether or not a person becomes alcoholic. Both genetic and environmental factors can exert an influence. According to the 2015 National Survey on Drug Use and Health (NSDUH), 86.4% of people 18 years of age or older reported drinking alcohol at some point in their lifetime. Some 70.1% stated they drank alcohol within the past year, 56.0% within the past month.

Most concerning is the current level of binge drinking nationally, 26.9% of individuals within the past month. For those unfamiliar with the term binge drinking, it is defined by the National Institute on Alcohol Abuse and Alcoholism (NIAAA) as a pattern of drinking that brings blood alcohol concentration (BAC) levels to 0.08 g/dL. This typically occurs after 4 drinks for women and 5 drinks for men when consumed over about two hours. Binge drinking is defined slightly different by SAMHS—Substance Abuse and Mental Health Services Administration—which conducts the annual National Survey on Drug Use and Health (NSDUH). They define binge drinking as 5 or more alcoholic drinks for males or 4 or more alcoholic drinks for females on the same occasion (i.e., at the same time or within a couple of hours of each other) on at least 1 day in the past month. Binge type of drinking is typically prevalent at bars, parties, sporting events, entertainment venues, and on college campuses all across the country.

According to the 2015 NSDUH, 15.1 million adults ages 18 and older (6.2 percent of this age group) had an alcohol use disorder (AUD). This includes 9.8 million men (8.4 percent of men in this age group) and 5.3 million women (4.2 percent of women in this age group). The number of fatalities as a direct result of alcohol are heartbreaking. An estimated 88,000 people (approximately 62,000 men and 26,000 women) die from alcohol-related causes annually, making alcohol the third leading preventable cause of death in the United States. The first being tobacco and the second being poor diet and physical inactivity. In 2014, alcohol-impaired driving fatalities accounted for 9,967 deaths (31 percent of overall driving fatalities). At NCPHP, many of the providers we see are referrals from the NCMB after having received one or more DWIs. DWI is something the NCMB takes very seriously, and rightly so. The reason – there is roughly a 35% chance that someone receiving their first DWI has an underlying substance use disorder (SUD), a 65% chance with a second DWI, and a 99% chance with a third DWI. 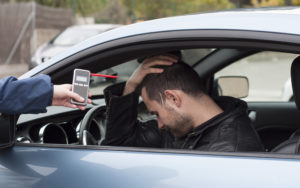 Driving While Impaired is a serious offense in North Carolina

I am often asked how one can know if they or someone they know has a problem with alcohol. While it may be glaringly apparent to everyone around the problem drinker or alcoholic, it is often not readily apparent to them. Remember, denial is one of the principle hallmarks of any addiction. There are various definitions of addiction which have been put forth, essentially all different ways of saying the same thing. One definition I have adopted over the years that I believe aptly describes the disease of addiction in simple terms—excessive use of a substance, negative consequences from use of that substance, continued use of the substance in spite of the negative consequences. This would be especially true of alcohol. There are clinical criteria which are used to diagnose and classify addiction to alcohol, or any other substance. They come to us from the Diagnostic and Statistical Manual of Mental Disorders, Version 5 (DSM-5). Here are the eleven symptoms currently in use for diagnosing an alcohol use disorder. Answer yes or no for each.

Answering to the affirmative for at least 2 of these symptoms indicates an Alcohol Use Disorder (AUD). The severity of an AUD is defined as follows:

All individuals with an alcohol use disorder should receive some form of treatment. The reasons are clear. Left untreated, all addictions will become progressive, permanent, and terminal. Different levels of a SUD require different levels of treatment based on severity. This can range from 12-step recovery meetings to intensive outpatient treatment to inpatient treatment, with or without add-on counseling, therapy, or care from an addiction medicine specialist. Unfortunately for the general population, only about 6.7 percent of adults who had an AUD in the past year received any treatment (7.4 percent of males and 5.4 percent of females) and the success rates of abstinence/recovery without treatment and follow-on support are abysmally low. Healthcare providers are more fortunate, especially in North Carolina. There are many more resources available to them, like NCPHP. Physicians and PAs can come to us, often anonymously, for compassion, understanding, care and concern. Thousands of providers with alcohol use disorders and other chemical use disorders have been through our doors since 1988. Our program participants’ success rate with SUDs is greater than 85% at five years of sobriety.

If you are reading this and feel you may have an alcohol use disorder or know of a friend or colleague who is suffering from alcohol, another chemical use disorder, a mental health issue, burnout, or from something else, please pick up the phone and give us a call. We can begin with a confidential discussion. We can help save licenses, careers, and most importantly, lives.  Please call NCPHP at 919-870-4480.