23 Feb Your Purpose in Life – 3 Questions You Must Ask and Answer – by Clark Gaither, MD, FAAFP

Posted at 13:06h in Provider Wellness by Beth

“To realize one’s destiny is a person’s only obligation.” ~ Paulo Coelho, The Alchemist

Like most life changing moments, it crept up on me and totally grabbed me. It was the most miraculous event I’ve ever witnessed. I remember the moment it happened as if it was just now.

It was 1990 and I was a first-year resident in family medicine on a surgical rotation. At three in the morning the head of the trauma department and transplant team paged me and asked if I would like to scrub in on a renal (kidney) transplant operation. “Absolutely!” I said. I knew it would be a neat operation to assist on but nothing prepared me for what I was about to witness.  Scrubbed in, gowned up, ready and standing by the table in the operating theater I watched as the transplant surgeon carefully removed the donated kidney from a red and white six-pack cooler. I remember thinking how odd it was that donated organs are transported in off the shelf drink coolers.

The kidney had belonged to a trauma victim. Donated at death it would now be used to improve and extend someone’s life, a stranger’s life, about as poetic an act of mercy as one can imagine.

The surgeon placed the kidney onto a sterile cloth covered tray and began to prepare it for transplantation. It was an ashen gray, well, kidney-shaped lump of tissue about the size of a small fist. The ureter, a tube that carries urine from the kidney to the bladder, extended from the kidney along with the renal artery and vein.  Using a pair of surgical forceps and scissors, he carefully picked away at the donor kidney removing any extraneous fat and fascia from the organ and its vessels. Even though kidney transplants are the most common and most successful organs transplanted, I was skeptical this gray lump of tissue was going to work. It didn’t look like it could. It didn’t look viable at all to me.  This activity went on for what seemed like forever until finally he placed the organ in a bath of cool saline and stood up. Meanwhile, the patient had arrived and was being transferred onto the operating table. I introduced myself and we chatted briefly before the anesthesiologist put her to sleep.

I still remember her name. She had been on the transplant list for a number of years. She had burned up both of her own kidneys through years of illicit drug abuse. The consequences for her addiction were severe.  For her, the kidney transplant would be transformational. It would give her a chance to get off of dialysis and on to a new pathway of living. First, she had to demonstrate her willingness to protect this precious gift by protecting herself from the ravages of drugs and alcohol.  She had hit her rocky bottom.  There she grabbed hold of hope and began to dream of a new life for herself. She was determined. For the past few years she had remained sober as she waited on the transplant list. I could see it in her eyes, the wide-eyed look of a dreamer watching their dreams come true. I wished her luck.

With the patient prepped, under anesthesia and the organ prepared for transplant the surgeon was ready to begin. He started by creating a pocket in the lower right side of her abdomen where the transplanted kidney would be placed. I held a retractor and tried not to get in his way.  The surgeon identified the iliac artery and vein. First, he connected the kidney’s vein to the iliac vein and then the artery to the iliac artery. Both remained gently clamped. Then he connected the kidney’s ureter to the bladder.  His movements were slow, meticulous, deliberate. Every now and then he would point out something of interest within the surgical field or ask me a question. I was enjoying every minute of it and I thought to myself, it doesn’t get any better than this. I was wrong.  After the kidney had been properly placed and the vein, artery and ureter were securely connected he removed the clamp from the renal vein. He looked up at me over his surgical mask and glasses and said, “I want you to remove the arterial clamp.” I was elated. As I reached for the clamp he added, “When you do, be sure to watch the kidney…closely.”  I ever so gently removed the arterial clamp, allowing blood to flow to the transplanted kidney for the first time in its new host. I never took my eyes off of the kidney. What happened next still gives me chill bumps.  Within seconds that non-descript, gray lump of tissue turned pink. Within a few seconds more it turned vermillion red. As I stood and stared, the ureter began to inflate as urine traveled down the ureter toward the bladder. In less than ten seconds after releasing the arterial clamp, this transplanted kidney was making urine. It was fulfilling its purpose. 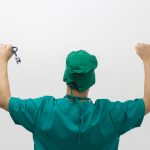 Behind my surgical mask tears were welling from my eyes and streaming down my face. I couldn’t help it. It was miraculous. Even without the benefit of being in its ideal environment, the original host, the transplanted kidney had no trouble fully elaborating its intended purpose.  The donor kidney wasn’t trying to pump blood like the heart, it wasn’t trying to secrete thyroid hormone like the thyroid gland, it wasn’t trying to manufacture digestive enzymes like the pancreas. It was doing precisely what it was designed to do. Its innate inner structure dictated the outcome. It was all there, inside.

I believe all humans have an innate inner structure which determines a purpose to fulfill, just like the kidney. Unlike the kidney, humans are different in one very important regard. We decide whether or not to fully elaborate ourselves, to fulfill our purpose.  You can choose to ignore your inner calling. You can choose to set aside your unique set of natural talents and abilities and live life contrary to your purpose, never to realize or fulfill it. It is estimated ninety percent of people do just that.  Unfulfilled dreams, dead end jobs, toxic relationships, job related burnout, unrealized potential, fear of change, feelings of inadequacy, a scarcity mentality — these are just some of the results of people never pursuing their destiny, not the reasons why.

There is only one reason why. It isn’t because they can’t. It isn’t because they lack education, money, a lucky break, or don’t know the right people. It’s because they chose not to.  In The Alchemist, a book about destiny, dreams, dreamers – those who pursue them and those who don’t – Paulo Coelho writes “To realize one’s destiny is a person’s only obligation.”  If you feel you’re not fulfilling your intended purpose or feel you haven’t yet found your intended purpose, it is never too late to pause, reflect and ask yourself a few simple questions —

The answers are all there, inside.